Wisconsin Sound Beginnings (WSB) is funded by the federal Maternal and Child Health Bureau and the Centers for Disease Control and Prevention (CDC) through grants to the Wisconsin Department of Health Services (DHS). DHS contracts with the University of Wisconsin-Madison Waisman Center University Center for Excellence in Developmental Disabilities (UCEDD) and other partners to administer the WSB program and the WSB database. This evaluation was supported by the Disability Research and Dissemination Center (DRDC) through its Cooperative Agreement Number 5U01DD001007 from the CDC. The contents of this brief are solely the responsibility of the authors and do not necessarily represent the official views of the DARDC or the CDC.

Other Contributors to this Research

Early Hearing Detection and Intervention (EHDI) programs in every state and territory work to assure that babies are screened for hearing loss and receive timely follow-up and intervention. Newborn hearing screening has been shown to identify hearing loss present at birth, and promote early diagnosis and treatment for babies who are deaf or hard of hearing. If a baby does not pass newborn hearing screening, follow-up may depend on many factors. Understanding which characteristics may make it more challenging for a family to complete hearing screening, and therefore be less likely to receive needed services, may help EHDI programs best direct their outreach to ensure babies receive the follow-up care they need. This research brief describes the evaluation of strategies employed by Wisconsin’s EHDI program, Wisconsin Sound Beginnings (WSB), focused on partnering with the Wisconsin Supplemental Nutrition Program for Women, Infants and Children (WIC). Approximately half of all babies born in WI are enrolled in the WIC program (similar to other states), which serves low-income women and children and provides food, nutrition education and referrals to other services the family might need. In Wisconsin, both WSB and WIC are administered by the Department of Health Services (DHS).

In 2000, the Joint Committee on Infant Hearing advocated universal hearing screening for all babies.1 Since then, newborn hearing screening (NHS) rates have increased so that over 99% of all Wisconsin babies receive hearing screening.2 Babies born in hospitals receive NHS before they are discharged, and babies born at home or in birthing centers often have NHS completed by a midwife. If a baby does not pass the initial hearing screen, a second screening or diagnostic test is necessary to confirm or allay a concerning result. The Joint Committee on Infant Hearing recommends completing screening by one month of age and diagnostic testing by 3 months of age (when needed), and beginning intervention by 6 months if a hearing loss is confirmed, to promote better outcomes for children with hearing loss.3 One of the goals of the WSB program is to ensure that all babies in Wisconsin receive hearing screening, which involves using multiple follow-up strategies to reduce the number of babies lost to follow-up, and to increase the number that complete the screening process. If a baby passes the screening or completes the diagnostic process, the baby’s “case” is documented as completed in the WSB newborn hearing screening database.

About 3% of all babies receiving NHS do not pass in Wisconsin. If a baby does not pass their initial NHS, the family is asked to follow-up through contacting their doctor and/or scheduling a re-screening or diagnostic evaluation with an audiologist, often at the hospital where the baby was born. Of all babies born in Wisconsin in 2010 who did not pass NHS and needed follow up, 32% were considered lost to follow-up (LTFU).4 Understanding which babies are likely to be LTFU may help design strategies to address the needs of specific families, and improve identification of babies with hearing loss. Early identification of hearing loss along with receiving timely interventions, has been shown to improve language and other developmental outcomes for children who are deaf or hard of hearing.5 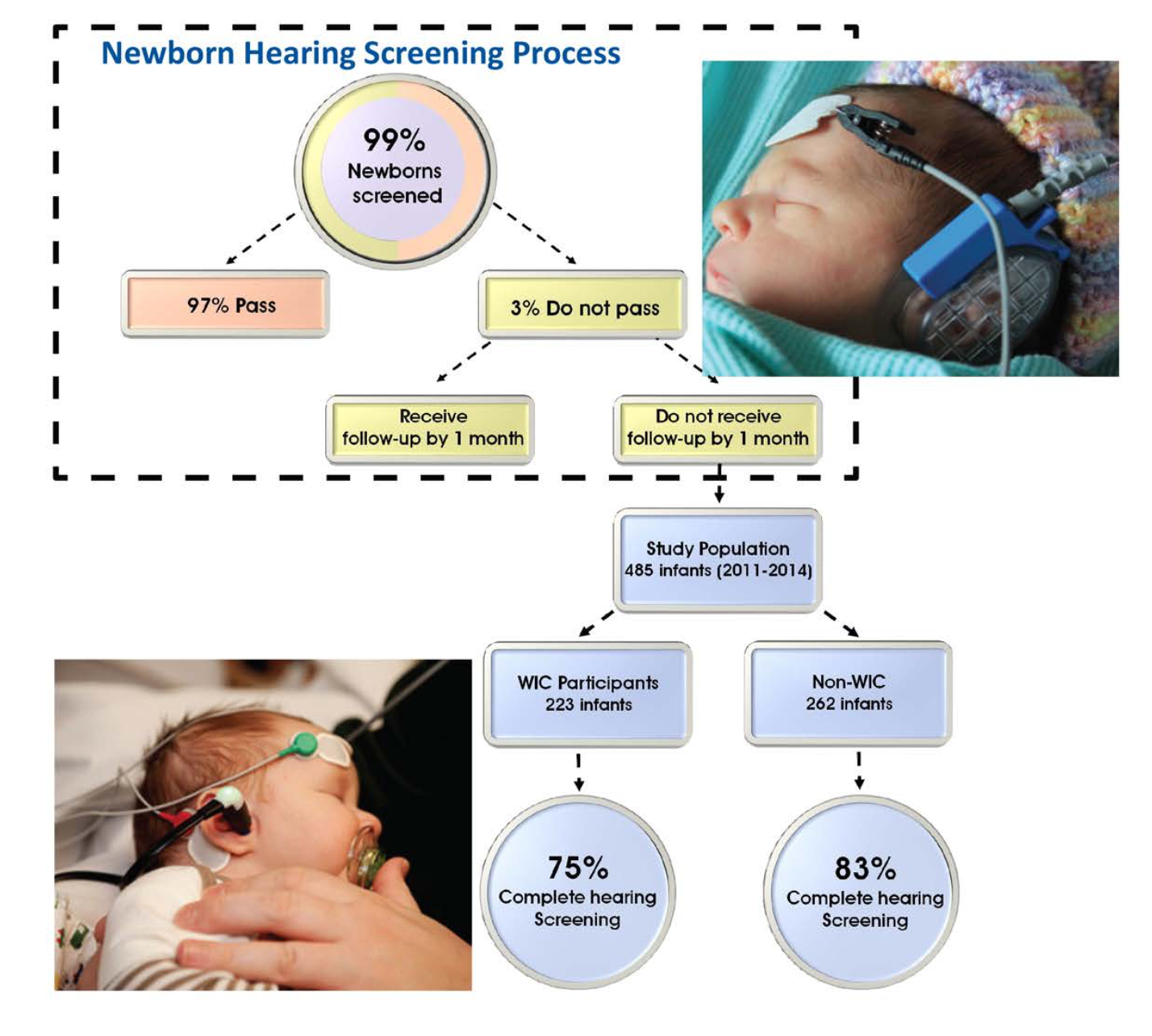 The first follow-up strategy used by WSB if a baby does not have a documented NHS by 1 month of age is to contact their birth hospital/audiologists and/or primary care providers who can assist in completing the newborn hearing screening (medical outreach). More than half the babies who need follow-up are able to complete their NHS in this way. Another strategy if medical follow-up is unsuccessful is to have a WSB family outreach specialist reach out directly to families. Partnering with other public health agencies, including the WIC program, is another strategy that WSB has explored to reduce the LTFU rate and increase the number of babies who complete newborn hearing screening. By 2016, the number of babies in WI who were considered LTFU was markedly reduced (see Results).

One factor hypothesized to affect re-screening rates is socio-economic status, which might mean families have less access to health care, transportation, and may move frequently or be homeless. Since having a low income is one of the criteria for WIC participation, families with these concerns are more likely to be using WIC. Based on these assumptions, partnering with the WIC program was a follow-up strategy that WSB implemented starting in 2011. The partnership included creating and signing a memorandum of agreement to share data between WSB and WIC to provide an additional point of contact for babies at risk for becoming LTFU. The intervention that was created used an existing alert system in the state WIC database to create a notice labelled the “WIC Alert” for babies who had not completed NHS. A WSB staff person, who was given access to the WIC data system, matched identifiers for babies at risk for LTFU in the WSB database with those enrolled in the WIC program to determine whether the baby was a WIC participant.

In 2013, funding was obtained through a research grant from the DRDC to the UCEDD to evaluate the effectiveness of the WSB-WIC partnership in reducing the LTFU rate for NHS. The research question asked was – “Does collaboration with the WIC program improve LTFU rates for newborn hearing screening in Wisconsin?”

Of the 485 babies at risk for LTFU who were born in the years 2011 to 2014, 223 babies were found to be enrolled in WIC and had a WIC alert placed in the WIC electronic database so that when they were seen at their local WIC clinic, the WIC service provider could assist the family in getting their baby’s NHS completed. The WIC provider was encouraged to call the WSB outreach specialist while the family was in the WIC clinic to enable the WSB outreach specialist to arrange to complete the baby’s NHS. Other strategies tested included WIC giving the family a letter (in their native language) stating that their baby needed to complete NHS and who to contact for help, and offering to have WSB staff complete the NHS at the WIC site. All of these actions were possible outcomes of placing the WIC alert. The remaining 262 babies were not found in the WIC database and received the strategies previously described to reach out to their primary care provider or directly to the family to complete their NHS.

The WIC Alert strategy did not significantly reduce the LTFU rate in Wisconsin during the evaluation time period (for babies born 2011-2014) on its own; however, the result of using all strategies (including medical and family outreach) resulted in a very low LTFU rate in WI. While the average LTFU rate in the United States was 39.3% in 2015, only 125 babies were lost to follow up in 2015, which is a rate of 15% using the CDC method of calculating FTFU.7 The low numbers of babies LTFU in Wisconsin made the statistical power of this study weak. Based on these low numbers, WIC participation and the WIC alert strategy did not reduce LTFU or improve NHS rates. However there were valuable lessons learned by conducting this type of systematic program evaluation. Of note, using the WIC alert strategy did result in almost equal proportions of babies in WIC receiving NHS screening follow up as those not enrolled in WIC, which is an excellent outcome.

While this evaluation did not show statistical difference in LTFU rates for NHS between babies who were WIC participants and those who were not, partly due to the low numbers of babies who ended up being LTFU and a lower proportion of babies being enrolled in WIC than expected, there were meaningful outcomes for Wisconsin families. The WIC partnership strategy may be more effective in states with higher LTFU rates for newborn hearing screening, less access to primary care, higher poverty rates, higher WIC enrollment, or other factors.

The WSB program found that collaborating with the WIC program promoted success in reaching families whose babies might not otherwise complete NHS. Unfortunately, it is impossible to know how many children enrolled in WIC would not have received NHS if the WIC alert had not been placed. For some babies identified as at risk for LTFU, the WSB-WIC partnership made the difference between the baby completing NHS or not (see Case Example). Additionally, the Wisconsin WIC program remains an informed, committed partner in reducing the LTFU rates for babies who did not pass their hearing screening. WIC staff report continued interest in assisting families in getting NHS follow-up services as part of their overall mission to refer and connect children with appropriate services.

Each state’s EHDI program has the opportunity to assess reasons for babies not completing newborn hearing screening and to design program strategies that address challenges that families face in completing early hearing screening and diagnosis of hearing loss. The WIC program can be a valuable partner in achieving this goal. As a result of this study and the efforts to find strategies that match the needs of families, the following recommendations emerged:

Partnering with other public health agencies, including the WIC program, is one strategy that WSB has explored to reduce the LTFU rate and increase the number of babies who complete newborn hearing screening. By 2016, the number of babies in WI who were considered LTFU was markedly reduced.8

Baby Zee did not pass his hearing screening at a hospital in Northeastern Wisconsin. When Zee was 30 days of age, he was identified as at-risk for LTFU. Through contacting the hospital that conducted his newborn screening, WSB learned that Zee did not show up for a follow-up audiology appointment and his family had not responded to the audiologist’s calls or letters. WSB also learned that Zee had not been seen by his primary care provider and Zee’s family had not responded to the primary care provider’s calls or letters. WSB identified Zee as a WIC participant and placed a WIC alert. WSB staff also contacted the family. Because the family was Hmong, WSB staff used an interpreter service to leave messages on the family’s phone in their native language. WSB did not receive any response to this outreach. Meanwhile, Zee’s family went to their WIC clinic for an appointment. WIC staff saw the WIC alert about newborn hearing screening, and called the WSB program. WSB staff talked with the family with the help of a Hmong-speaking WIC provider. WSB offered to screen Zee at the family’s house or at the WIC clinic. The Hmong-speaking WIC staff offered to help WSB screen the baby at the WIC clinic. instead, Zee’s mom chose an in-home screening because she did not have a car and thought it would be hard to get back to the WIC clinic. WSB staff traveled to the family’s home the following week, and Zee passed his second hearing screening. Without the WIC Alert and action by the WIC provider, Zee would likely have been LTFU.